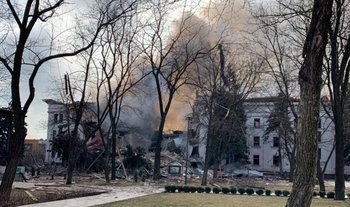 On 24 February, the news on the Russian invasion of Ukraine raised strong reactions from all over the world. Out of solidarity with Ukraine, the 4CH European project launched an immediate initiative to save digital documentation of Ukrainian cultural heritage, to preserve its memory and support the future restoration of assets from the damage caused by the war.

The cultural heritage community has strongly condemned the invasion and expressed its concern for the threats to Ukrainian cultural assets. Cultural heritage is the patrimony of a community, it preserves and perpetuates its memory, values and identity. Destroying artworks, monuments, historic buildings and remnants of the past cancels with them the history and identity of the Ukrainians, adding irreparable damage to the unacceptable losses of human lives and the distress of the population which is causing millions of refugees.

4CH, the European project in charge of setting up a European Competence Centre on the Conservation of Cultural Heritage, reacted rapidly and, after receiving hearty approval by the European Commission, started an action to save the digital documentation of Ukrainian cultural heritage. The initiative, titled SUM – Save the Ukraine Monuments, rapidly established direct personal contacts with Ukrainian authorities, heritage institutions and private companies, and with Ukrainian colleagues, still at home or in the EU.

On 3 March the network was operational, and the first transfers could start. Security system and a robust uploading procedure were in place. INFN (Italian National Institute of Nuclear Physics), the 4CH coordinating institutions, set up the necessary storage system, paralleled by a similar one in Poland at the Poznan Supercomputing Center and by analogous provisions at the University of Luxembourg.

4CH has set up an international task force, with people from Italy, Belgium, Ireland and Latvia, supervised by PIN, an Italian research agency in charge of technology within 4CH, and coordinated by a Belgian partner. Soon a Ukrainian researcher temporarily at INFN joined it, speeding up the communication with people from his homeland. The task force then included people from the Polish and Luxembourg participants in the action, i.e. the Institute of Literary Research of the Polish Academy of Sciences and the Centre for Contemporary and Digital History at the University of Luxembourg, and by others within the EU, most notably by Europeana. On the Ukrainian side, many people in different positions, including private companies with a substantial portfolio of 3D heritage models, agreed to proceed with the data transfer.

Ukrainian datasets are already being transferred using the Internet and safely stored in our servers. At present there are about 100 Terabytes in the queue or already transferred, involving large institutions and organizations or relatively small museums outside of the major centres. All are equally important for us. The transfer procedure requires time due to the imaginable difficulty on the Ukrainian side in collecting the datasets and using a Internet connection subject to the issues of wartime.

All the data collected will be preserved and returned to the legitimate owner when – hopefully soon – the situation will improve with the end of this terrible war. 4CH will also offer its competence in pro bono assisting Ukrainian institutions in any task required for the restoration of their digital archives and supporting the physical restoration of the monuments of this historically significant country.