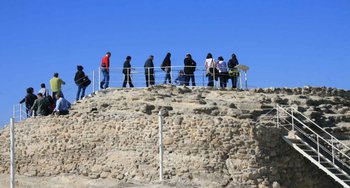 At a time when Europe is trying to establish the foundations of its New Bauhaus and it is clear that cultural heritage must occupy a privileged place, the management of the environment of Galera (Granada, Spain) is an exemplary model of growth through investment in research and the protection of its heritage.

The village, like so many others in rural areas was threatened by abandonment and depopulation, has, after 19 years of managing its two archaeological sites, increased its number of inhabitants, revitalised the area, generated international interest and, created human, cultural and emotional links with other municipalities in Spain.

The Galera model should be beyond the reach of political interests, yet this summer the Junta de Andalucía decided to withdraw aid of 40,000 euros per year for opening its two sites to the public. How can a political decision interfere in the development of a model of wealth and population growth? This is the great debate in Europe. Although, population growth in Galera has been 4%, the social impact obtained from the preservation, digitisation and promotion of its heritage to the whole world, is immeasurable. Without it would be very difficult to understand our present as a civilisation. For this reason, culture and heritage can no longer be part of the political game, because they are the DNA of a people and its identity.

But let's go into Galera, which, without subsidies and with the meagre budget of a village of 1100 inhabitants, decided this summer to open its heritage to the public. Its past is a fabric of very special life experiences. There is not a single inhabitant who has not participated at some point in the archaeological work, sharing the dust of the ground and the inclemency of the sun with Iberian and Argaric scholars and experts from all over the world for years. Nationals and foreigners from all cultures, eager for knowledge, have found nourishment in the archaeological finds and in the close relationships with the local people who documented them with stories, songs and customs that they often shared as guests at the table in their homes. Living together experiences, spaces, values, work and leisure while investigating the past, has served to shape an economic model for the future, respectful, circular and sustainable, where people come first. The researchers left their mark and took away unique experiences, such as that of living in a house dug out of the rock, built by hands that did not know about architectural universities, but were full of popular wisdom.

THE VALUE OF WHAT IS LEARNED WITH THE HEART

They say that only what is learned with the heart reaches the brain and can move the soul. This is what the teacher of the Galera school, Jesús María García, practised 30 years ago. Passionate about archaeology, a visionary of the future, he passed his respect for the those sites on to a whole generation of students. He knew that these vestiges would allow them to be recognised throughout the world, to make a living from teaching, and attract large investments to polish this diamond in the rough. He organised theatrical performances in the excavations in which children played the role of men and women of the Argaric culture, encouraging them to investigate and awakening their curiosity. So much so that the generation that took part in the 1960s excavations set themselves up as guardians of the treasure against the looters and some of the village children ended up studying geology and archaeology. Since the 1960s, archaeological excavations have continued uninterrupted with the constant participation of the people of the village. Today one of those students is mayor of Galera and archaeologist for the Junta de Andalucía.

GALERA, THE PAST AS A PASSPORT TO THE FUTURE

1.5 km from the town of Galera we find Castellón Alto, a Bronze Age site of the Argaric culture, which preserves all the urban planning of a medium-sized settlement.

The second oldest adult and child mummy in Europe were found on this site, perfectly preserved and known as the Mummy of Galera. A few kilometres from Galera you can visit the Iberian Necropolis of Tútugi, the largest in Spain, which contains remains from the 5th to 3rd centuries BC.

To the excavations of the Necropolis of Tútugi we owe one of the most important finds of the Iberian world: the Goddess of Galera and valuable information about the rituals of the Iberian world and its culture. Part of these two sites and their remains have been digitised in 3D and models are available to researchers and citizens from all over the world who want to get to know the value of the area.

These sites, among the most spectacular in Andalusia, have consolidated the area as one of the most attractive archaeological regions in Europe. In fact, they form part of the "Route of the First Settlers of Europe", as their remains show that this was one of the first inhabited territories in Europe.

The archaeological sites of Galera receive more than 7,000 visitors a year, 43% of whom demand accommodation in the area. The visitors are families or couples looking to get to know the region and the attraction of sleeping in a cave house. Other visitors include associations, university students, specialists, historians and groups.

In the last year the population of Galera has grown by 4%, an unheard-of fact in the whole region of Huéscar. The opening of the archaeological sites, the Municipal Archaeological Museum of Galera and the visitor centre, generates 2% of the total employment in the municipality and has an annual impact of 220,000 euros on the hospitality and services of the municipality.

And although the sites of Castellón Alto and the Necropolis of Tútugi are sufficiently important to generate visitors’ curiosity on their own, the proximity of other sites complements the attraction of the area. For example Baza and its Iberian lady generates a continuous flow of visitors and lies 45 kilometres from Galera. The Baza-Galera twinning organises an annual historical re-enactment in both municipalities on an alternating basis. 7 kilometres from Galera in the municipality of Orce, lies one of the most important paleontological sites in Europe and Asia with evidence testifying to the presence of humans from one million four hundred thousand years ago, the first inhabitants of what is known as Eurasia. 150 kilometres from Galera lies the prehistoric site of Los Millares from the Copper Age (3200-2200 BCE), the first city of this period settled in the Iberian Peninsula, which also brings tourists attracted to prehistory. 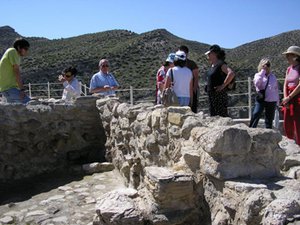 With all this wealth, the Junta de Andalucía has declared the area a Geopark of Granada with the deposits of Galera as the centrepiece. The same autonomous government has suddenly withdrawn public funding for the enhancement of a model at Galera that works. However, Galera is clear, the recovery of its past is the direct passport to its future. After several decades, its inhabitants retain the same enthusiasm and pride in patiently digging up their history so that the knowledge can be shared and owned by all those who, like that generation of schoolchildren, allowed themselves to be won over by the passion and respect for heritage anticipated by that wise schoolteacher.