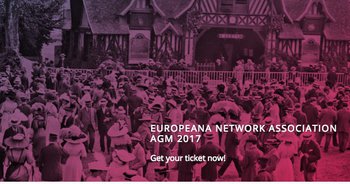 The Europeana Network Association AGM will be held on 6th December 2017 in Milan, Italy

In addition to Network-related highlights and Members Council elections, information will be available on new Impact Framework and Playbook. The focus will be on assessing and communicating the value that culture has for the society, and how it can be measured.

This year’s AGM 2017 is also an opportunity for Europeana Network Association members to voice their opinions and to showcase their own projects. You are invited to submit a project idea that embodies one of the themes of the 2018 European Year of Cultural Heritage by 15 November. Your project will then have a chance to be presented at the AGM and get a full support of Europeana with impact assessment.

The AGM will be followed by the European Commission's European Cultural Forum on 7-8 December.

The early bird special registration, a discount of 15 Euros is still open up until 1 November.

Find out more and register to attend