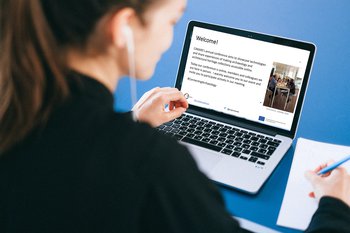 On the 24th June CARARE’s annual conference took place online and was attended by members, associates, researchers, students and others with an interest in archaeology online.

Kate Fernie started the proceedings by welcoming attendees and guiding them through the programme for the day, which was divided into four sessions: 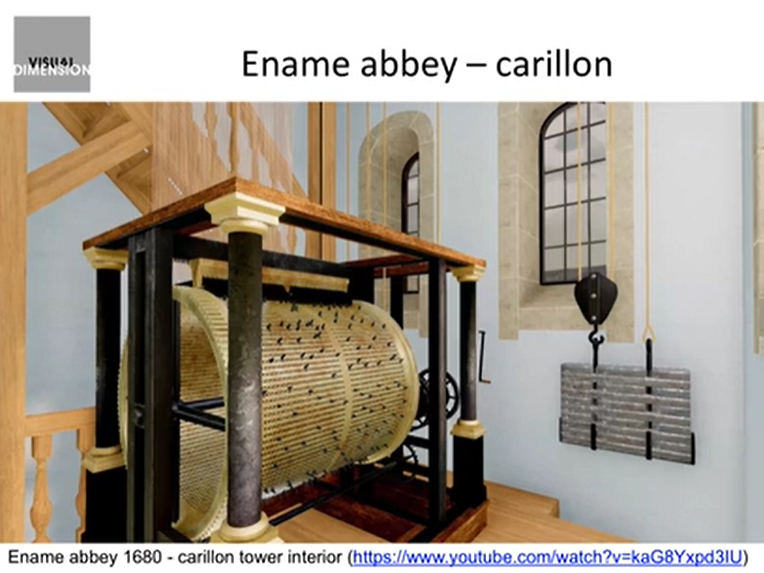 Daniel Pletinckx from Visual Dimension, talked about how to reconstruct intangible heritage in 3D and explained that even though the use of 3D in cultural heritage is typically considered to be 3D digitization, in order to fully visualise and experience past environments -that don’t exist anymore- they cannot be merely digitised but need to be reconstructed. Daniel’s presentation gave an overview of virtual reconstructions of different types of intangible heritage, focusing on one project where a complete carillon tower has been reconstructed, including its sound, use and function as a clock. 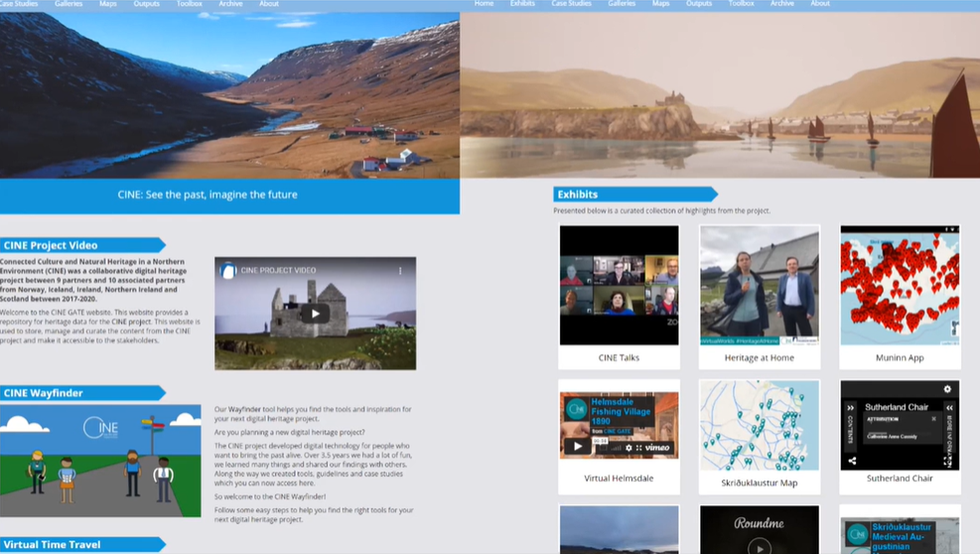 Catherine Cassidy and Alan Miller from the University of St Andrews presented CINEGATE, an Infrastructure for Immersive and Mobile Virtual Museums and discussed how it supports digital heritage creation, metadata archiving, aggregation, and dissemination of digital representations of cultural and natural heritage. The infrastructure has been developed in part of the CINE Northern Peripheries and Arctic Program project and has the potential to support heritage organisations in working with emergent digital media to create virtual museums. 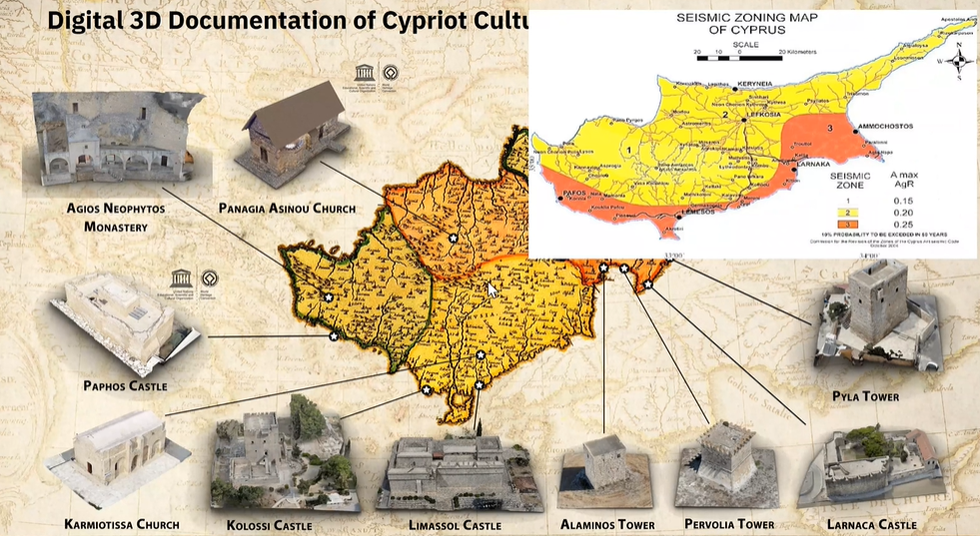 Marinos Ioannides form the Cyprus University of Technology, illustrated in his presentation a new novel documentation methodology for the digitization, modelling and long term preservation of eight medieval monuments of Cypriot Cultural Heritage. The holistic approach he discussed, includes data acquisition technologies such as terrestrial 3D laser scanning, UAV photogrammetry and thermal image processing while the data intended for the creation of 3D modelling use Heritage Building Information Modelling (H-BIM) in order to capture the current stage of the monuments and to implement architecture, engineering and construction (AEC) parameter. 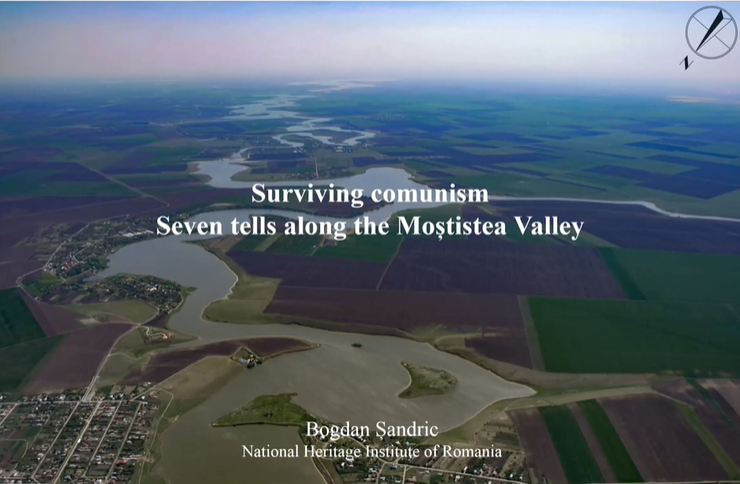 Bogdan Sandric from the National Heritage Institute of Romania explored the remarkable aerial photographic collection of the Mostiștei Valley, which is now availanle in Europeana. Mostiștei Valley is located in the Southern part of Romania. Between 1960 and 1970, following an extensive archaeological field research project, over 540 archaeological sites dating from the Stone Age to the 17th century were mapped. Amid the archaeological sites located in the valley there were seven multi-layered Neolithic settlements, also known as tells, dated between 4500-3900 BC. The aerial photographs were taken between 2007 and 2008 under the auspices of the European Landscapes project. 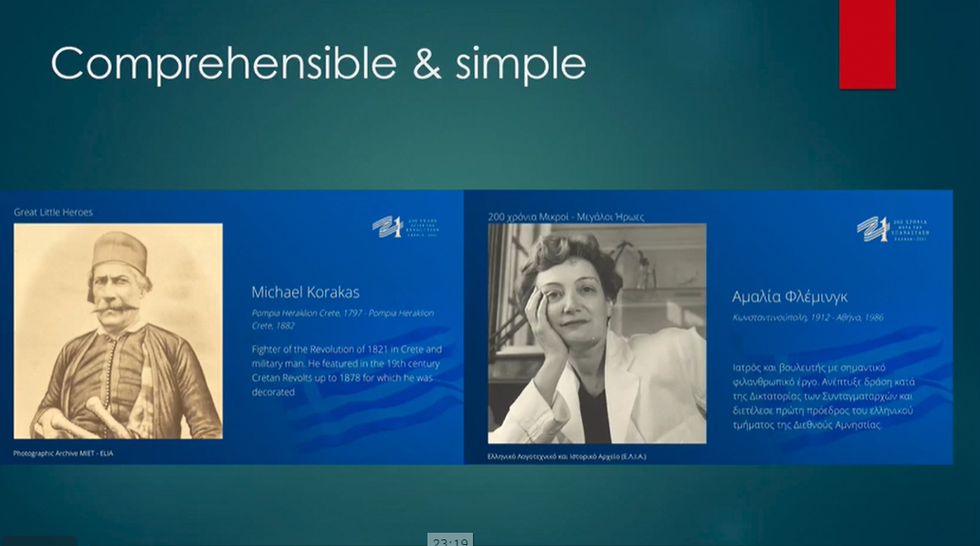 Elena Papalabrou from the Greece 2021 Committee, presented the project Great Little Heroes which is an initiative of the Greece 2021 Committee, responsible for the coordination of projects and events for the celebration of the Greek Bicentennial. Great Little Heroes is the creation of around 700 images presenting the Greek men and women, who marked with their life and their work the 200 years from the revolution to today. These images are accompanied by the appropriate software needed for screening on the public screens provided by the organizations collaborating with the Committee. 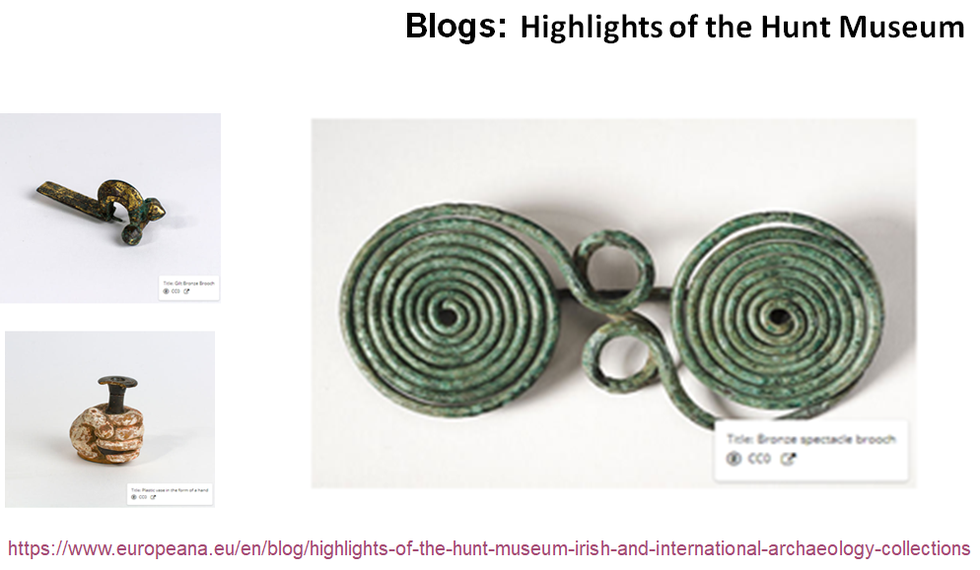 Effie Patsatzi from CARARE guided participants through archaeology in Europeana and presented some highlights of content, galleries and blogs published by CARARE’s members and data partners in Europeana in the past year. 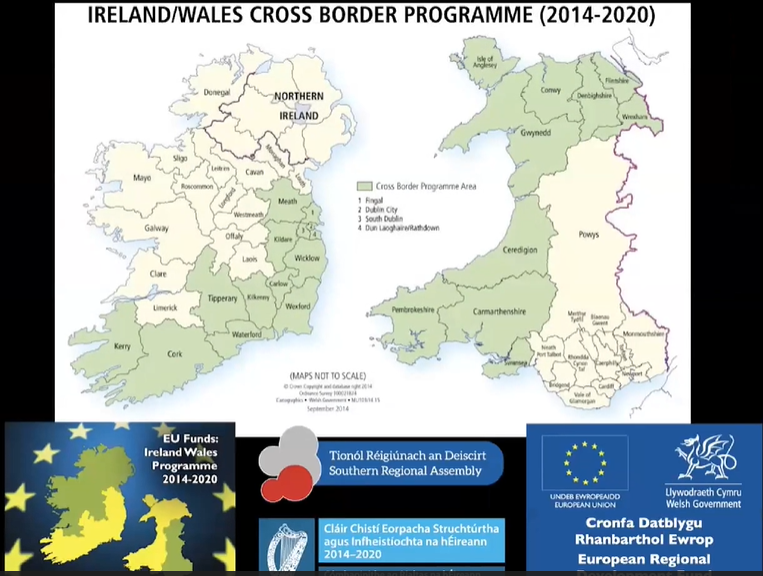 Anthony Corns from the Discovery Programme and Louise Barker from RCAHMW presented CHERISH – the Climate Change and Coastal Heritage Project, cofunded by the EU, which brings together a multidisciplinary team of archaeologists, geologists and environmental scientists. The project is developing an integrated methodology of survey and investigation, to record and monitor the impacts of climate change at a network of coastal and maritime sites in Wales and Ireland. 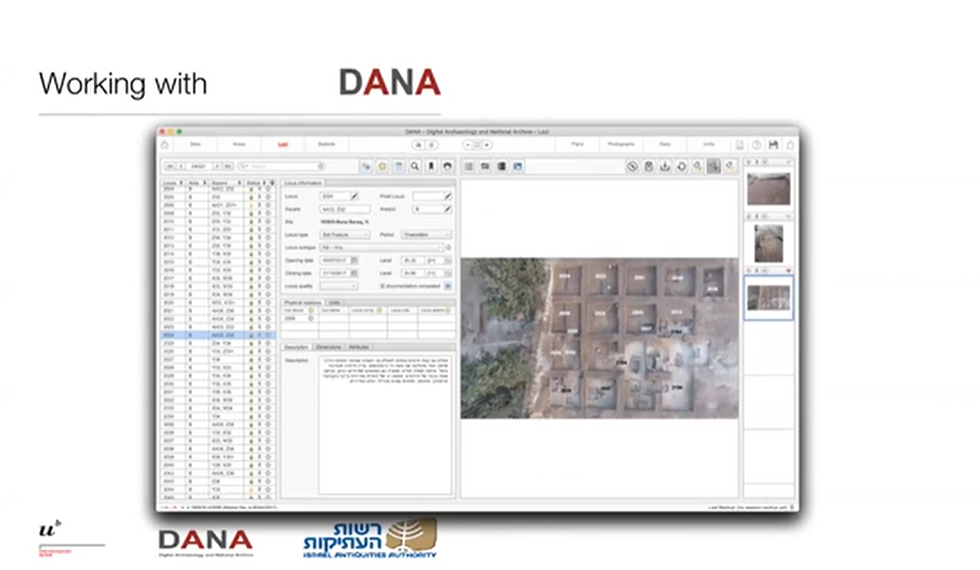 Liat Weinblum from the Israeli Antiquities Authority (IAA) showcased in her presentation why and how the IAA moved towards a digital recording system in all its excavations (approx. 300 a year). The DANA archaeological documentation system not only needs to streamline and facilitate the archaeological documentation process but also to simplify the administrative reporting workflow, including a seamless integration into the broader, already existing IT-framework of the national archives. Likewise, the system is expected to guarantee highest academic standards during fieldwork and in the following publication phases. 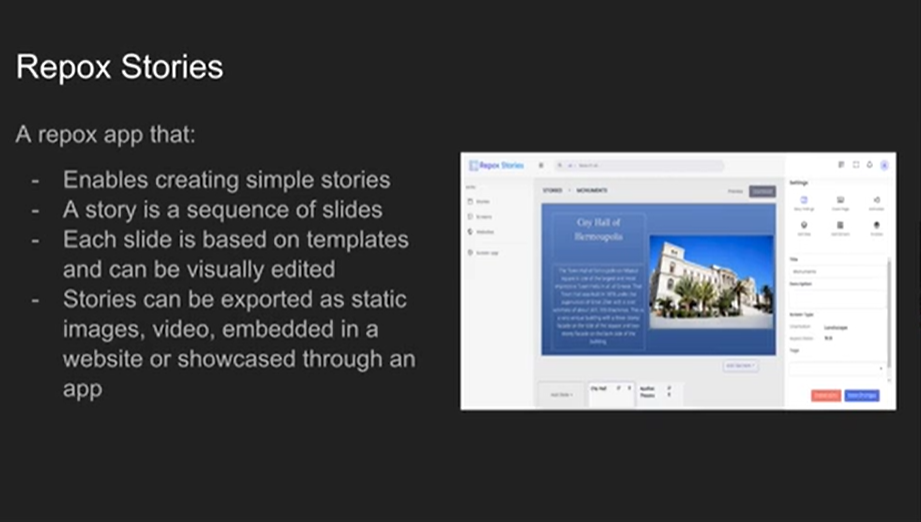 Dimitris Gavrilis and Vangelis Nomikos from Datawise Engineering LLC, presented Repox, a supercharged cloud storage service with a data model that also allows users to process data to tell stories. REPOX can be used as any ordinary cloud storage solution but with entities, properties, relationships that are subtly enforced without compromising usability and maintain high data quality and expressiveness. 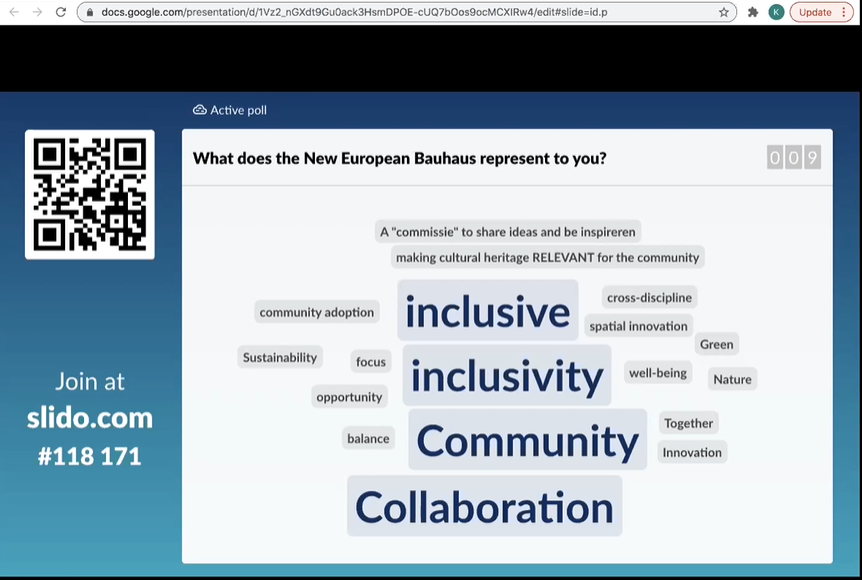 A vibrant conversation took place during the CARARE Café session about the new European Bauhaus, a new initiative of the European Commission focusing on shaping beautiful, sustainable, inclusive places to live, which was in its consultation phase up to the 30th June.

Thanks to the European Bauhaus conversation, CARARE was able to submit a response to the consultation.

Throughout the conference sessions attendees had the chance to exchange views and post comments, while during the Café session, on the New European Bauhaus, they had their say using slido polls. If you missed the event, the recordings of the sessions are published on CARARE’s vimeo channel.