Webinar on Digital Cultural Heritage May 12, 2020 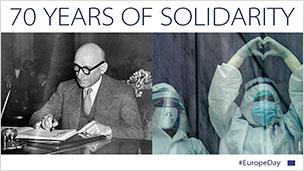 A Digital Cultural Heritage webinar was held on 9th May to celebrated 70 years of peace and unity in Europe.

On Saturday the 9th of May 2020, Heritage-Malta, the UNESCO and ERA Chairs on Digital Cultural Heritage at the Cyprus University of Technology in cooperation with the European Commission, The European Commission Representation in Cyprus, the COST Association and in collaboration with the Europe Direct Limassol hosted a webinar on Digital Cultural Heritage to commemorate this year’s Europe Day.

Last Saturday, the European Union celebrated 70 years of peace and unity in Europe. The 9th of May commemorates the Schuman Declaration of 1950, which led to the creation of the European Coal and Steel Community and later to the well-known European Union.

The two hours long webinar, which was streamed live on Zoom and Facebook, brought together over 800 people from all corners of the world. Representatives from several European institutions, Cyprus and Malta gave a series of presentations on the future and potential of Digital Cultural Heritage, a subject which is critical during this period of uncertainty and isolation highlighting the need to be #UnitedInDiversity and that we are #StrongerTogether in #EuropeForCulture.

Keynote speakers from Cyprus (Marinos Ioannides and Douglas Pritchard) and Malta presented how embracing digital technologies to preserve our memory of the past can contribute to safeguarding the world’s heritage for future generations. Representatives of Heritage-Malta discussed the impact of coronavirus on cultural heritage and how alternative digital approaches can inspire the public to meaningfully engage with their heritage, through initiatives such as the gamification of the UNESCO World Heritage site of Valletta. Colleagues from the Cyprus University of Technology made a case for the holistic digital documentation of cultural heritage places and objects, presenting the extensive 3D documentation of the Asinou Church in Cyprus and Cologne Cathedral in Germany, both UNESCO World Heritage sites.

The webinar conveyed a strong message of collaboration between EU Member States in safeguarding their cultural heritage through technology, showing that diversity is a source of strength for all societies.