Lithuanian cultural heritage in a digital world: Europeana workshop May 14, 2018 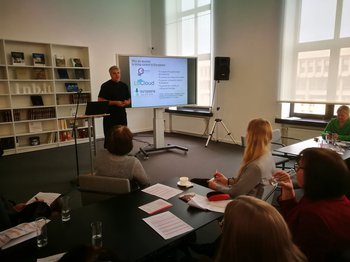 The workshop was hosted by the National of Library of Lithuania and supported by Europeana, which has developed a training playbook which aims to show the value of reaching a pan-European audience when publishing content with Europeana.

Nicole McNeilly, collections editor at Europeana, reports that the day began with an inspirational presentation from Renata Petrušić of the National and University Library in Zagreb. Renata showed how more open and collaborative approaches in their work in Zagreb had helped boost the value of their digital collections. She presented an exhibition called Picture This!, a collection of vintage postcards from southeastern Europe.

Rimvydas Laužikas of Vilnius University (and a founding member of the CARARE association) presented a local case study. The university is the largest Lithuanian contributor to Europeana Collections and has published archaeological content through CARARE.

The day included a mix of presentations introducing Europeana's Publishing Framework and Licensing Framework and topics such as data quality.  There was a practical exercise on the topic of rights statements, and the day ended with a discussion on the technical and political challenges faced by Lithuanian institutions with regards to opening up their collections.