The case of the Asinou church and the documentation of its frescoes in all three communication forms, i.e. audio, visual and text

Asinou church is considered one of the most important Byzantine churches in Cyprus and is the first 3D object harvested in Europeana.

UNESCO recognised Asinou’s historical importance by declaring it a World Heritage monument. Its significance lies upon a stark contrast. Although it is a small remote rural church, it is decorated with refined iconographic masterpieces, echoing artistic influences from the capital, Constantinople, but mingled with Western trends and local traditions.

The team of UNESCO Chair on Digital Cultural Heritage at the Digital Heritage Research Lab of the Cyprus University of Technology decided to give the murals the opportunity to ‘raise’ their voice and ‘speak’ for themselves. This was done by using of the state-of-the-art technology through their digital recording and presentation. This allowed the outstanding and universal value of the frescoes and their stylistic traditions and trends to be highlighted. The above procedure was embedded in a bigger and ambitious project for the holistic documentation of the monument.

At first, the group of archaeologists, historians and theologists decided on the methodological approach. They separated the frescoes in ten sections, each one of them containing a unique number. This fragmentation was especially helpful as it gave the opportunity to study in depth the history of the church. Each fresco was recorded in text describing the story of the mural, the iconographic style, any existing underlined fresco layer, the association between these layers and the frescoes themselves, as well as the place of origin of the artist who executed them.

The aim of the project was to demonstrate how each one of the frescoes enhanced the overall message which the iconographic cycle of the church attempted to communicate to the viewer.

In a second stage, the team of experts recorded the texts of each mural in audio form. Consequently, an online HBIM (Historic Building Information Model) platform was created. Each text description, the 3D documentation of the murals and the audio file were uploaded on the platform, so that the multidimensional aspect of the intangible information for the holistic documentation of the monument was accomplished.

The outcome of the project was fascinating. The church is now capable to ‘talk’, tell us its history, disseminated to a wide multidisciplinary professional community and other users (such as students, tourists, disabled people etc.) for use and re-use.

As it is said, a picture is not only worth a thousand words but it can narrate its story through digital transformation, bringing the monument to life.

View UNESCO: Painted Churches in the Troodos region, this includes the Asinou church. 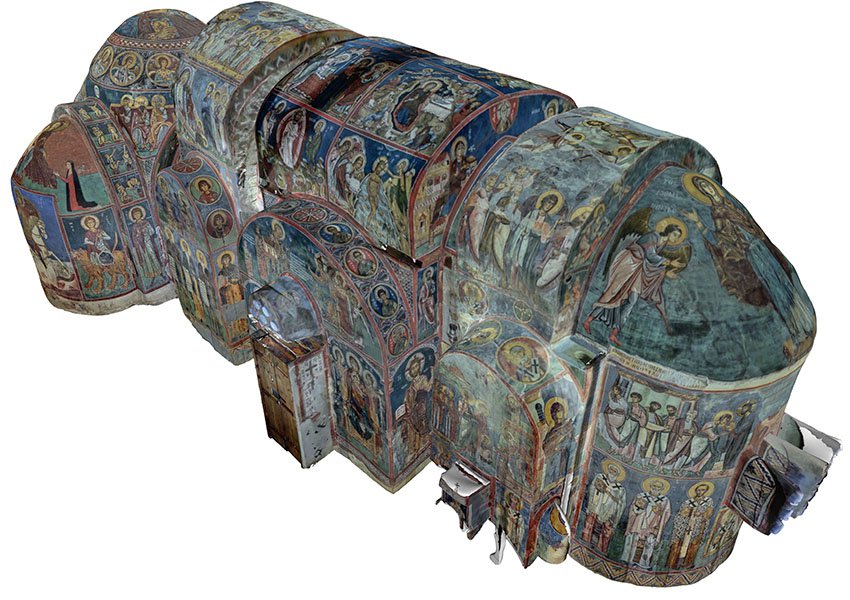