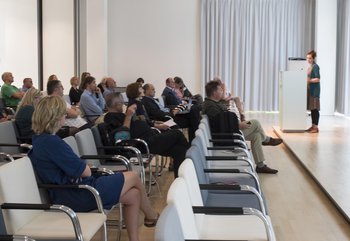 On the 28th June, CARARE organised a one-day conference “Archaeology and Architecture in Europe” in Amersfoort, The Netherlands.

The conference brought together about 50 people from across Europe to hear nine presentations exploring hidden histories, current issues and future directions.

Kate Fernie began the day by presenting the CARARE association and its membership services, cooperation with Europeana and involvement in projects.  CARARE is a partner in the ARIADNE plus research infrastructure and Share3D.

Next Henk Alkemade presented his ideas on how we can take inspiration from the past to tackle climate change problems of the present day.  Using the Netherlands as an example, he showed through images, maps and other archives how the landscape has changed.  The dense network of canals, windmills and water systems established from medieval times onwards has reduced in modern times.  With climate change, there is a need to take inspiration from the past to manage water today.

Šarūnė Valotkienė gave us a glimpse of the every-day realities of archaeologists working behind the Iron Curtain in Lithuania between 1948 and 1968.  An archive of diaries, memoirs and photographs gives a fascinating picture of how archaeologists continued working during the period, their living conditions, clothing, tools, equipment, transport and how local women and children were employed on site.

Rimvydas Laužikas was up next talking about how and why people today engage with the archaeological heritage.  He gave a fascinating insight into how different communities come together to explore their heritage from different perspectives.

One such community focusses on archaeological open-air museums.  Roeland Paardekooper, the director of EXARC, spoke about the digital methods used in interpretation in open-air museums. He noted that museums often use VR and AR because “everybody else is doing it so why can’t we?”  Suggesting that it is important to bring digital professionals into a closer cooperation with museum professionals, to create results that work effectively for museums and their audiences.

After lunch, Anthony Corns spoke about the CHERISH project which is responding to the impacts of climate change, the increase in storms and extreme weather events on the coastal heritage.  An impressive range of techniques is being used to record sites both on the coast and below water in the maritime zone.

The day concluded with a presentation by Daniel Pletinckx on the methods used to create 3D interactive resources – capturing, modelling, animating and annotating.  Daniel also spoke about the Share3D project which is developing story making tools for 3D contents.

The conference was a great opportunity for CARARE members and participants to make contacts and discuss the wide range of ways in which digital technologies are being used and the types of content made available in Europeana.

View the presentations from the conference

Participants enjoying the networking opportunities, and the summer sunshine, during the lunch break.