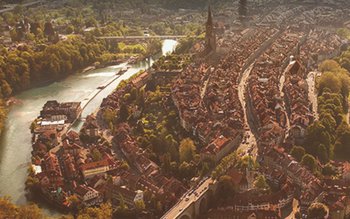 For many of us, Bern is the place where the future of Modernity began after Einstein´s 1905 Wunderjahr (miracle year or Annus mirabilis), whilst working for the Patent Office in Bern, Einstein published his four papers on the photoelectric effect, the Brownian motion, the special relativity theory and the mass-energy equivalence. On the 100th anniversary of the Dyson-Eddington-Davidson experiment that first tested the General Theory of Relativity, EAA comes to Bern to celebrate its own 25th anniversary. This fold in spacetime is therefore an extremely appropriate occasion to reflect on what our real contribution from Archaeology and Archaeological Heritage has been and can be, for a future in which everything that seemed solid in 1994 has melted away under the pressing threats that challenge an inclusive and progressive idea of Europe. If paradigms become like the mountains, barriers that enclose our lives and experiences, thinking beyond the sets of theoretical barriers we have constructed enables us to discover the fissures in these paradigms that, like the passes through the mountains, foster interaction and convergence. For this very special occasion, we would like to particularly encourage all our members to propose sessions relevant to the main themes of the Annual Meeting that include the "EAA 25" label in their title. These sessions should offer a unique opportunity to evaluate what has been the contribution of the EAA to the proposed topic throughout its 25 years history, not only with regard to developments in the field, but also with regard to prospects and challenges for the future. EAA particularly welcomes session proposals that reflect on the socio-political dimensions of archaeological knowledge and heritage, in order to facilitate the realignment of accepted practice with current and future requirements.